“Three Strikes” or “The House Loses”

Posted on October 19, 2016 by dangerouschristian 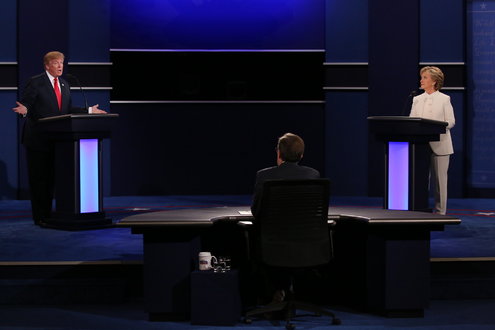 Wisdom is better than strength.
Nevertheless the poor man’s wisdom is despised,
And his words are not heard.
Words of the wise, spoken quietly, should be heard
Rather than the shout of a ruler of fools.
Wisdom is better than weapons of war;
But one sinner destroys much good.
Ecclesiastes 9:16-18 (New King James Version-emphasis mine)

Well folks, we had “Round 3” of the 2016 Presidential Debates live from Las Vegas, and I’m shaking my head over the whole thing.  I heard the debate on the radio coming home in my truck tonight.  From what I heard it was quite interesting.

I think Donald Trump is suffering from early dementia:  he seems to keep going back to ISIS.  I think if Chris Wallace (moderator) was to ask Trump the name of his wife, he would probably answer, “ISIS”.  Plus, we had more of Trump’s interrupting both his opponent and the moderator.  Trump also created a new word, “bigly”.  We saw Hilary Clinton go after him and keep him on the ropes for the debate.  Also, Trump ended the debate being evasive about what his response will be with the upcoming election results.

Although Clinton was pretty much the victor in tonight’s debate, I’m not automatically tossing my hat into her ring.  As I’ve constantly said, Clinton’s got too much dirty water under the bridge for me.  Also, Clinton was not that concrete regarding a “No Fly” zone over Syria, which can be problematic for our relationship with Russia should one be established.  Also-like her opponent-Clinton was a bit vague about the economy, the national debt, and entitlements.

Both Trump and Clinton struck out tonight.  Although many in their respective camps will still go to bat for them, I can’t be so kind.  With Trump’s bluster about “rigged elections” and Clinton’s foreign policy; I have grave concerns about America’s future.  Both candidates have no real appreciation for democracy-or liberty-for that matter.  I see America losing the house, regardless who winds up in the White House.

As tonight’s Scripture lamented, the rational voice of the common person (We The People) is never heard, while fools in power (including Trump and Clinton) have their voices heard.  Plus, these two will be more harm than good.  They snub their noses at the Constitution and Bill of Rights.  I wouldn’t trust either of them on the nuclear trigger since one’s too unstable and the other’s too eager to use it.  Their sins can easily destroy this great nation and its credibility on the world stage.

Shame both candidates can’t be disqualified from running after their collective third strike; maybe it could bring a change of elections.  However, the way this game is rigged up, the house ultimately loses-even in Las Vegas…

And believe me, this is a loss we cannot afford.  Peace.

My name is Victor Reynolds. I'm a Christian who desires a more mystical approach to my spiritual life. I'm also a photographer as well who loves to create. I call myself "dangerous" because anyone-especially a Christian-who dares to be beyond the "norm" and allows to let the Christ live in them is dangerous.
View all posts by dangerouschristian →
This entry was posted in news, politics, thoughts and tagged 2016 Presidential Campaign, 3rd 2016 Presidential Debate, Book of Ecclesiastes, Chris Wallace, Donald Trump, economy, Hilary Clinton, ISIS, Las Vegas, Russia, Syria. Bookmark the permalink.

5 Responses to “Three Strikes” or “The House Loses”