Posted on March 24, 2016 by dangerouschristian 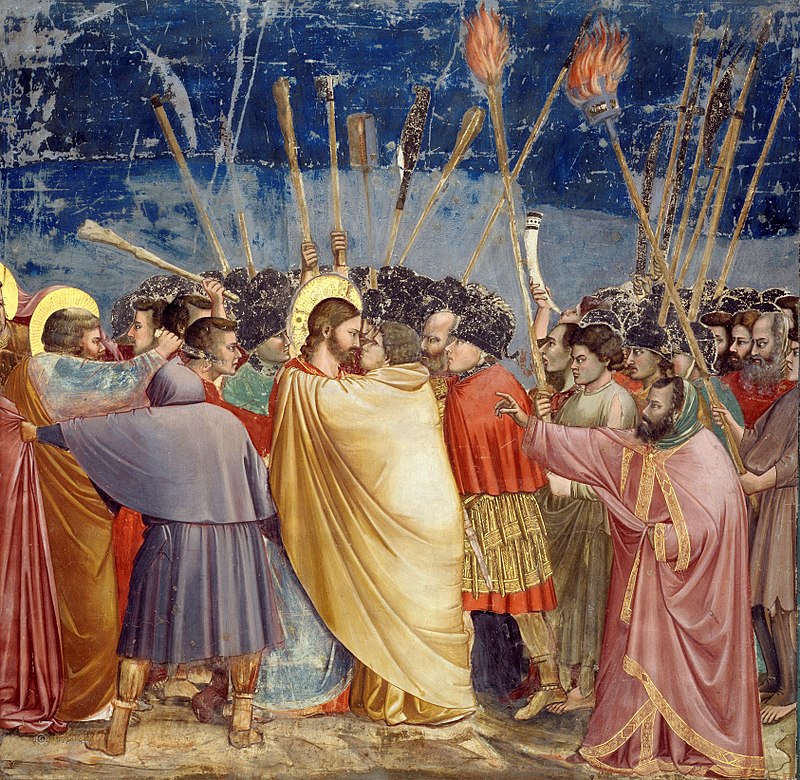 14 Then one of the twelve, whose name was Judas Iscariot, went to the chief priests 15 and said, “What will you give me if I deliver him over to you?” And they paid him thirty pieces of silver. 16 And from that moment he sought an opportunity to betray him….

20 When it was evening, he reclined at table with the twelve. 21 And as they were eating, he said, “Truly, I say to you, one of you will betray me.” 22 And they were very sorrowful and began to say to him one after another, “Is it I, Lord?” 23 He answered, “He who has dipped his hand in the dish with me will betray me. 24 The Son of Man goes as it is written of him, but woe to that man by whom the Son of Man is betrayed! It would have been better for that man if he had not been born.” 25 Judas, who would betray him, answered, “Is it I, Rabbi?” He said to him, “You have said so.”…

3 Then when Judas, his betrayer, saw that Jesus was condemned, he changed his mind and brought back the thirty pieces of silver to the chief priests and the elders, 4 saying, “I have sinned by betraying innocent blood.” They said, “What is that to us? See to it yourself.” 5 And throwing down the pieces of silver into the temple, he departed, and he went and hanged himself
Matthew 26:14-16, 21-25; 27:3-5 (English Standard Version)

He was one of the most reviled characters in Biblical literature.  In fact, his name became synonymous with the word, “traitor.”

His name is Judas Iscariot-one of Jesus’s disciples.

Judas has gotten a bad rap for betraying Jesus to the high priests for 30 pieces of silver, a decision he later regretted before hanging himself.  It’s a side tale that’s always told during Holy Week.

It was at the Passover of Jesus and his disciples when Jesus made the shocking revelation that one of the twelve disciples would betray him (ref. verses 26:21-25); however it was Judas who asked if it were him and revealed his hand.  And it was later that night in the dark Garden of Gethsemane, when Judas greeted Jesus with a kiss-signalling to the high priests and soldiers who Jesus was.

Judas is the one character we don’t want to think about Holy Week.  We look upon him with evil eyes.  However, what about Judas?  Who was he?  Why did he betray Jesus?  First, Judas was believed to be of the Kerioth region of Judea; “man of Kerioth” is the Hebrew for “Iscariot”).  We did not see any pre-disciple history of Judas; any kind of previous occupation-like we did with Peter or Levi.  Judas just came onto the scene.

Now the Million-Dollar Question is why did Judas betray Jesus?  It was commonly believed that Judas hoped that Jesus was the messiah who would overthrow Roman rule off Israel once and for all.  However, when that didn’t play out, Judas got disillusioned with Jesus and decided to betray him.  However, in the evangelical camp, is that Judas was “foreordained” to betray Jesus; he was part of God’s plan for Jesus during his Passion and Jesus allowed it (John 13:27-28).  I have a problem with this “foreordained/allowing” theory for the reason that if God/Jesus allowed the betrayal, why did Jesus say it would have been better that Judas was never born? (verse 26:24b) To me, that makes no sense whatsoever; and to say this was all part of God’s plan makes God a sloppy planner.  And let’s remember, these Gospels were written at least a generation or two after the events.

Recently, we saw the arrival of the Gnostic text, The Gospel of Judas, where Jesus had Judas betray him as part of his mission.  Plus, in the end, Judas wound up being the good guy to whom Jesus teaches the true meaning of his message.  Although I too read about this “gospel”, I’m left out in the cold by it-especially with its late arrival on the scene (late 3rd Century CE); and that it was penned by Gnostic Christians at that time.

My take?  I believe that Judas represented two things.  First: he was representative of the Jews who rejected Jesus’s teachings (note his collusion with the High Priest and elders); which later became an anti-Jewish pejorative.  Second: if we look at the stories figuratively and esoterically, I see Judas as the part of us that caters to the base things in life (30 pieces of silver) and “betraying” our higher nature represented by Jesus.  That we look for the quick rewards in life that give us temporary pleasure but long term grief over living higher in God.

We’ll never know the whole truth about Judas-regardless what your pastor or priest may preach.  However, I believe he deserves a place in the Holy Week story since he plays an important part-whether you believe it literally or figuratively.  Plus, we all are Judas-one way or another-ourselves.

(Image: The Kiss of Judas, by Giotto di Bondone)

My name is Victor Reynolds. I'm a Christian who desires a more mystical approach to my spiritual life. I'm also a photographer as well who loves to create. I call myself "dangerous" because anyone-especially a Christian-who dares to be beyond the "norm" and allows to let the Christ live in them is dangerous.
View all posts by dangerouschristian →
This entry was posted in Christianity, heretics/heretical thinking, thoughts and tagged betrayal, Book of Matthew, Gnosticism, Gospel of Judas, Holy Week, Judas, Maundy Thursday. Bookmark the permalink.