Posted on July 4, 2013 by dangerouschristian 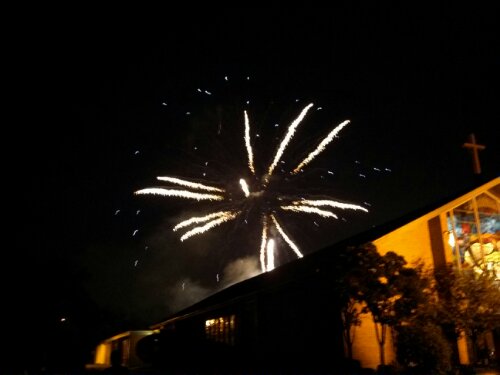 Fireworks in Mountainside (Image by Me)

The Spirit of the Lord is upon me, because he has anointed me to proclaim good news to the poor. He has sent me to proclaim liberty to the captives and recovering of sight to the blind, to set at liberty those who are oppressed

Wednesday was Independence Day here in the United States commemorating our 237 years as a nation declaring our independence from the then-mighty British Empire. Parades, cookouts, sales, events, and fireworks all commemorate this day. I started this post while watching a fireworks celebration (photo above) last night. We hear the words “freedom”, “independence”, and “liberty” bandied about on that day as if they were some sacred mantras.

Yet, in spite of all the patriotic hoopla, an important question remains: are we truly free? We speak a good game of being free, about having liberty, and being independent individuals.  However, if you look at our present situation as people, it would give a different answer.

We talk about “freedom”, yet we in America still want to deny Gays and Lesbians the freedom to marry.  We talk about “liberty”, yet our dear Powers That Be deny We The People our liberties by increased security surveillance, onerous taxation, and laws that serve only a elite few.  And, we talk about “independence”, yet we’re still dependent on outdated religious, political, and socio-economic systems that hinder our growth as a nation.  We are not free at all.

In the above Scripture text, Jesus read the words of the Old Testament prophet, Isaiah regarding his then prophetic mission. Both men saw the people of their days oppressed (which I believe the above verse’s metaphors pointed to); and that their mission was to bring a word of liberation to them.

In our day, we find American Xtianity woefully lacking in this department.  Many times, Xtianity is more on the sidelines not getting its hands dirty.  Except for a brave minority, American Xtianity is more into keeping itself and others oppressed by doctrinal totalitarianism that excludes those that need liberation the most in our society.  It’s quick to quote “liberty”, “freedom” and “independence” when it suits its needs; and to speak about its “religious rights”.

Today we have hurting people who are “poor”, “captive”, “blind”, and “oppressed” in our nation (as well as our world).  Even if they’re not physically in those states, nine times out of ten they’re spiritually in those states.  We can’t go spouting about “liberty”, “freedom”, and “independence” while there are still those in our midst who are still in the situations mentioned above.  We need-as followers of Christ and others-to reach out to those who need to hear the Good News of God’s love for the “poor in spirit” (ref. Matthew 5), proclaim liberty to those captive by their issues-internal and external, give sight to the spiritually blind (and God knows there are plenty), and liberty to the oppressed in spirit.

My thoughts for Independence Day?  Let’s take the above Scriptural text to heart and become those agents of liberating change that Isaiah and Jesus spoke of.  Let’s get off the sidelines and first, free ourselves; and then go about freeing our society.

Then we can truly speak of liberty, freedom and independence.  For they won’t be just words to get our patriotic rise; they’ll be words we’ll truly live by-not just on Independence Day, but every day.  And not just here in America, but all over God’s world.

My name is Victor Reynolds. I'm a Christian who desires a more mystical approach to my spiritual life. I'm also a photographer as well who loves to create. I call myself "dangerous" because anyone-especially a Christian-who dares to be beyond the "norm" and allows to let the Christ live in them is dangerous.
View all posts by dangerouschristian →
This entry was posted in life, society, spirituality, thoughts, world and tagged current events, freedom, holidays, Independce Day, independence, liberty, old testament prophet, United States. Bookmark the permalink.